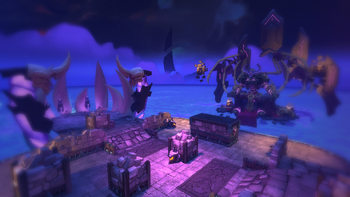 Throne is one of the maps in Paladins and was released in the Paladins 1.3 update.

This map has mirrored layouts and is designed for 2 teams of 5 players. The bases are located at opposite ends of the map.

It was released for the Rise of Furia event. But now the only Game Mode that is currently playable in this map is Team Deathmatch. This map can only be played in Custom matches.

Multiple Abyssal Lords call this dimension home and each control a spire with a court at the top. Spires, as well as all its platforms, float above an opaque sea. The sea occasionally has geyser-like bursts at its surface, reminiscent of magma. There is an eternal yellow "moon" that stays at the top of the sky, though it is unknown if this moon is specific to the spire we visited or if its presence is linked to the presence of an Abyssal Lord.