Ash made a name for herself in the Magistrate army by volunteering for front-line duty using experimental heavy armor and siege weaponry. Lacking finesse or subtlety, she more than makes up for it with brutal tactics and overkill. The War Machine, as she is called by her allies and enemies alike, earned the title every time the dust settled and she was all that remained on the scorched battlefield.

When the Resistance emerged and brought the war to Crosswind Hold, Ash led the charge against them with fury and determination.

Fire a shrapnel round every 0.9s that explodes in an AOE dealing 400 damage.

Superheat your next shrapnel round. When you next fire, the round will instantly explode in a frontal cone, dealing 450 damage and applying a knockback.

Lower your shoulder and hurtle forward. Hitting an enemy will deal 800 damage and apply a strong knockback.

Leap forward and plant your Banner in the ground dealing 350 damage on impact and creating a Damage Immune zone for yourself that lasts 8s. You must remain in the zone to receive the Immunity.

For tips on Ash, see Ash/Tips

For all of Ash's cards, see Ash/Cards

Paladins - Who is Ash, the War Machine?
Add a photo to this gallery 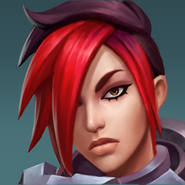 Ash's in-game profile
Add a photo to this gallery

Retrieved from "https://paladins.fandom.com/wiki/Ash?oldid=8656"
Community content is available under CC-BY-SA unless otherwise noted.