The Man Out of Time

There is no light in the future, only an all-consuming Darkness. The Realm is lost. Atlas will be born into this dark future as the son of a legendary Judge. Each day he fights to survive, and each night he finds solace in stories of the Realm that used to be. These stories give Realm-kind hope, but their final stand against the Darkness will fail tragically. All hope will be lost... save for one last glimmer.

In a desperate bid, Atlas studied old books of Crystal magic, and mastered the control of time. He researched old tales of what could have been the source of this destruction — of how the world had fallen. And then, Atlas stepped into the past, determined to save the Realm, and stop the Darkness, by changing the course of history itself.

A futuristic weapon you can charge up to increase its accuracy and damage while firing fewer shots. Deals 900 damage every 1.5s if fully charging your shots.

Fire a concentrated ball of chronon energy that Rewinds its victim back to where they physically were 4s in the past. This blast reverts their Health to its lowest point during that period.

Rewind yourself to where you physically were 5s in the past. Your Health is reverted to its highest value during that period.

Create a barrier in front of you to absorb all ranged attacks and projectiles. It lasts 5s.

Supercharge your chronon accelerator for 5s. While in this state, you have 3 modified chronon weapon shots that will Banish enemies for 4s. Banished enemies can not be interacted with by anyone. Using this ability consumes 40% of your Ultimate charge and each shot consumes an additional 20%. Can be refired to cancel.

Paladins in 90 Seconds - Atlas, Man Out of Time
Add a photo to this gallery 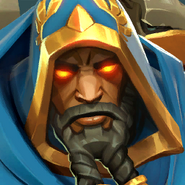 Atlas's in-game profile
Add a photo to this gallery

Retrieved from "https://paladins.fandom.com/wiki/Atlas?oldid=8776"
Community content is available under CC-BY-SA unless otherwise noted.