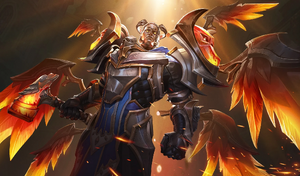 Once the king of a long-forgotten kingdom, the Eternal has existed to see countless reigns end. Forged in the crucible of the Pyre’s flames as the embodiment of all that Persists, Azaan is tasked with maintaining the existence of a Realm kept free from Abyssal influence.

Few still alive have ever had cause to engage with the one of the oldest of the Pyre Lords, but those who have know that his purifying flames care not for friend or foe, only for the complete eradication of the Abyss. Events in the Realm have upset the balance, leading to the Abyss’ influence creeping ever closer, and so the Eternal descends from on high to deliver a final warning to the Realm: deal with the Abyss, or have it be dealt with, by any means deemed necessary.

Reduce the damage you take by 5% and gain 40% Lifesteal on your hits with Judgement.

Augment Reckoning, Sanctuary, and Conviction, but increase their base Cooldown by 50%.

Your Ire no longer decays due to not taking or dealing damage, but you no longer gain the passive damage increase while above Ire threshold.

This is a list with all cards available to Azaan:

All of the following cards are in Azaan's pre-built loadouts:

These are the Cosmetic Items currently available for Azaan:

Pray the Realm does not become vulnerable to corruption.

For when balance is lost, the eternal will descend, and flames will envelop all.

From the ashes of corruption, the world will rise again.