Long before he came to the Deepwerks and helped develop the crystal-powered technology spreading throughout the Realm, Barik was a clever inventor and resourceful engineer.

Since then, his signature contributions have appeared in almost every field and vocation, from mechanized mining suits and rocket-powered wings to the crystalline weapons used by Magistrate and Resistance soldiers alike.

After a falling out with the corrupt Magistrate commander assigned to oversee the security of the Deepwerks, he left and pledged his services to Valera and the Paladins.

A short range blunderbuss shooting 13 pellets that deal a total of 500 damage, every 1s. Effective at Short Range.

Deploy a barricade that provides cover. Barricade has 5000 health and lasts 4 seconds or until destroyed.

Build a turret that fires at enemies for 120 damage every second and lasts until destroyed. You may deploy up to 2 turrets.

Deploy a 20,000 health Dome Shield for 6 seconds with a Flamethrower turret inside that deals 400 damage per second.

For tips on Barik, see Barik/Tips

Paladins - How to Play - Barik (The Ultimate Guide!) 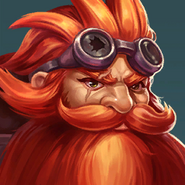 Barik's in-game profile
Add a photo to this gallery

Retrieved from "https://paladins.fandom.com/wiki/Barik?oldid=8630"
Community content is available under CC-BY-SA unless otherwise noted.