During a fortress siege long ago, a clever warlord decided that the best way to breach her enemy's defenses would be to create walking bombs. Her warlock accidentally brought one of the larger bombs to life, creating the Bomb King. After destroying the warlord's entire army by himself, Bomb King struck out on his own delusional quest to visit the lands under his rule, which happened to be all of them.

The common folk knew better than to offend or even stand very close to him, as his regal demeanor can instantly change to furious, explosive rage at any moment.

Throw a sticky bomb every 0.7s that will stick to enemy Champions for 2s, with a maximum of 6 out at once. Sticky Bombs deal 900 damage in an area when detonated.

Detonate all active Sticky Bombs, causing them to explode.

Throw a Grumpy Bomb that grows angrier over 3s, exploding dealing 800 damage and stunning all targets in range for 2s.

Throw an unstable Poppy Bomb that sticks to any surface. Detonating this bomb applies a knockback.

Roll into King Bomb for 5s. Explode and deal up to 2500 damage to targets near the center, knocking yourself back and stunning enemies. Ignores shields.

For all of Bomb King's cards, see Bomb King/Cards

Paladins - How To Play - Bomb King (The Ultimate Guide!)

Paladins - Champion Teaser - Bomb King, His Majesty
Add a photo to this gallery 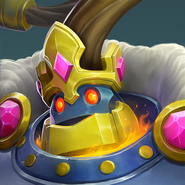 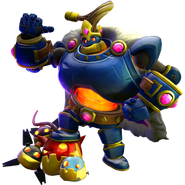 Bomb King's promotional render
Add a photo to this gallery

Retrieved from "https://paladins.fandom.com/wiki/Bomb_King?oldid=8811"
Community content is available under CC-BY-SA unless otherwise noted.