Bots are AI controlled characters in Paladins, they participate when a player disconnects from a match or in Training vs AI matches. Players below account level 5 will be automatically queued for these practice matches when attempting to join a casual match. Bots are identified by their generic names, default skins, and walking patterns.

At the start of the match, bots will wander around in their base, some may fire their weapons, and some may use the VGS.

After the round starts, the bots follow a pattern towards the point.

When they capture the point, bots will follow the payload until they reach the objective.

Bots that are defending will stay near the payload until the next round.

Bots will stay on the objective until they reach 400 points.

Flank bots tend to stay near their enemies bases if all of their allies are on point.

In this gamemode, all bots, except Frontlines, tend to hunt down players more often than other gamemodes, this is most likely to earn points.

Bots will wander around the map trying to find the enemy team. For some unknown reason (presumably a pathfinding error/bug), Jenos and Lian bots idle in their respective spawn locations until they encounter an invading enemy, consequently fixing it.

Example of Bots in Paladins[] 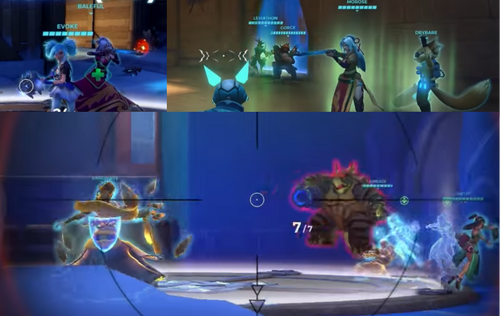 Champions that are played by Bots in Training[]

Champions that are NOT played by Bots in Training[]

Replacing a Disconnected Player with a Bot[]

If a Human Player loses connection or quits a match, a Bot will take control of said player, this solution is an attempt to avoid 4v5s and overall unfairness.

Identifying if a Bot Took over a Player in a Match[]

Icon in the Scoreboard[]

An icon is displayed next to the disconnected player in the scoreboard. The champion is now controlled by a bot. However, the player has the opportunity to regain control of the champion with a reconnect.

When a bot takes over a player, their title will disappear, an important tip is to pay close attention to your allies titles. (If they have one)

Suddenly Saying "Hi" or "Good luck!" with the VGS in the Middle of a Match[]

Going Directly to the Capture/Control Point[]

This is only viable on Siege, Onslaught and King of the Hill!

Bots will always "rush" to the point, no matter the role. Pay attention to your suspicious teammate if they're going aimlessly towards the point.

Idling on the Capture Point[]

Bots stay on the point until they spot an enemy or until Victory.

The Player didn't Connect to the Match[]

On the Loading Screen, every Loading Frame has a "crystal" on the bottom indicating if the player successfully connected to the match. If the crystal is still not glowing after everyone in the Match is ready, they could've disconnected.

No Talent and Loadout Selected[]

If a player couldn't connect to the match, they will have no Loadout equipped until they reconnect.