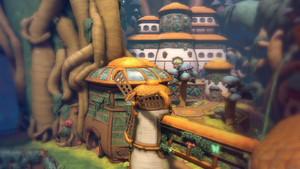 Brightmarsh is one of the maps in Paladins and was released in the Paladins OB49 update.
Like every Siege Map, Brightmarsh also has certain callouts.

Trials of the Realm Bio:
"With the Realm in strife, most of the Brightmarsh's buildings have fallen vacant, abruptly deserted when the Vulpin left to serve as medics for both sides of the Crystal War."[1]

Other Information
It was revealed here that Brightmarsh is located in the Enchanted Forest, which is later revealed here to also be part of Greenwood.