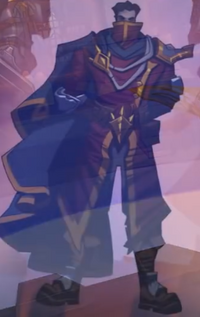 Before he was officially named, the community had named him "Knaifu the Waifu Stealer", or simply "Knaifu" due to his initial appearance with a knife, along with his "stealing" of Abby to sacrifice to the Abyss in Rise of Furia. He was also known in the community as "The Unknown" or "Red". Thunderbrush had referred to him as "Coat-Guy" .

The most difficult decisions test even the strongest of wills, but his will has never wavered, even in the face of seemingly insurmountable odds. He is Corvus, The Magistrate’s Blade. He is the son of Karne, the powerful leader of the Magistrate, but it is by his own merit that he has earned the absolute loyalty of his men and instilled fear in his enemies.

A charismatic leader and brilliant tactician, Corvus will stop at nothing to see his goals realized: a peace to surpass that of the Golden Age, under the Magistrate’s rule. With the near-limitless energy of the Abyss, bent to his iron will, and those soldiers still loyal to his vision of peace, he is doing what no other is capable of. By his own strength, the Resistance will fall, and peace will be forged for the Realm’s citizens, with or without their cooperation.

Believing the Abyssal portal in the village of Seris demanded to be fed, Corvus would arrive to offer the girl known as Abyy to the Abyss; though there was resistance from her sister Sarah, she was not strong enough to prevent Abby from being taken. Corvus would offer Sarah a lock of her sister's hair, before proceeding with the sacrifice. However, it soon became apparent that the Abyss did not hunger for a soul to satiate its hunger, but for a body. The Abyss was unleashed, and the village was completely destroyed; Corvus one of the few to survive, protected by an unknown force.

At a later point, Corvus would lead his troops deep into the Shattered Desert, likely hoping to use the shards of the moon that had fallen there centuries ago, in order to defeat the Resistance and end the war. However, he would come into conflict with the Resistance yet again while in the desert city of Bazaar, the battle causing immense destruction. Despite having led the Resistance to Bazaar in order to change history, Atlas still struggled to match the power of Corvus' troops. It was here at the urging of her contemporary, Jenos, that the goddess of the moon, Io, would come out of hiding and protect her people.

After the battle at Bazaar, Corvus had barely escaped with his life. Shaken by the Resistance seemingly having two gods on their side, Corvus was desperate for a solution. The Abyss took advantage of this desperation, using the body of the girl sacrificed at the village of Seris, she offered him immense power from the Abyss; control over an Abyssal Lord. She tricked him into opening a portal, releasing Raum into the Realm, who would later come to battle with the warrior, Tiberius. This action cost him his reputation in the Magistrate, and after being tried for his crimes, was exiled from the group. Furious at the Abyss for deceiving him, and also disappointed in the Magistrate for not seeing the reasons behind his actions, Corvus created his own group, one that he intends to use in order to control the Abyss, and bring about a new golden age of peace unlike any seen before, no matter the costs.

"The tides of war are turning against you. You’ve nowhere left to turn. There is only one option left to you, should you dare to take it."

"Reared in the eternal conflict of the Abyss. Nourished on the souls of the lost. Be certain of one thing: this force will annihilate anything that stands in its way."

"And so I showed them the door to otherworldly power. And they opened it. How easy it is to lead desperate men down the path to their own destruction."

"I told them that this force will annihilate anything that stands in its way, and it will. For nothing stands in the way of RAUM."

"I devoted my life to the Magistrate. In return? They cast me out for doing what had to be done."

"From the beginning, the so-called Paladins have been nothing but a nuisance. They strive for conflict and call it peace. If true peace is to be achieved, all of them must be silenced."

"In the shadows of my exile, I cannot help but wonder how many of my compatriots remain trustworthy. After so many battles together, could they truly see me as their enemy?"

"I will lead the few brave enough to see the truth.With the powers under my control, I will bring this conflict to an end."

"If the citizens of the Realm refuse to unite for its protection, I will be there to correct their course. No more proxies. No more lies. Peace must come. No matter the cost."

I've earned their respect, and I have been invited to join the Judges with an honorary place at the cadet's table, but I'm struggling to come to terms with the medal they're (short indecipherable portion scratched out) awarding me for "bravery" on our patrol. It's hollow. I never would have imagined such a monstrous thing could exist in the Realm. So many lives were lost. What does 'bravery' matter if I failed to bring everyone home? Apparently, it has also earned me some new assignment that everyone refused to speak about. None of it matters, though. As long as in a month from now, this new position gives me the power I need to keep my people safe.

They say the most difficult decisions test the strongest of wills. Mine was tested today. Nobody but I understood why it had to be done - that this was the one chance to save everyone. One girl's life was to be given at the exchange for the entire town's - but in the end, it didn't matter. The entire city of Seris was destroyed by the Abyssal explosion that her death was meant to prevent. It is m my burden duty to protect as many as I can. If deciso decisions like this mean that the people I seek to protect despise me, then at least they are alive to do so.

I had to try. How many lives have been lost already? How many under my command had died in this endless conflict with the misguided 'Resistance'?

This was meant to turn the tides - an Abyssal Lord under Magistrate control would have ended things quickly. The Resistance, with their star-god and the moon goddess; their vision will see the Ma Magistrate gone, and with it, the Realm. So I did what I needed to be done.

That lying oracle took advantage of our desperation. She whispered her lies, and I believed them. No more. All I've done in service of the Realm, and the Magistrate, and this was no different. I'll be the one to fix this, all of it.

So it has come to this. I've been tried for my "crimes" against the (short indecipherable portion scratched out) Magistrate and the people. This morning, I heard them list off why I should be chastised, and I laughed. They have no idea what this Realm needs to survive.

I now control power my father has deemed "unfit" for humanity; my men still stand by me. Only I have the strength. Only I have the willpower to bend the Abyss. No more proxies. No more lies. I will put the Resistance in its place and usher in an age of prosperity the likes of which this Realm has never bef before seen.

I will do what must be done.

A sacrifice was meant to save the town of Seris, but... I couldn't save everyone. The Abyss always wants more. Thousands of lives... gone. But I survived. Something... protected me. I knew this power could end the war, could save the Realm. But... the lying oracle tricked me, and these horrors I've unleashed, are worse than any war. The Abyss is volatile, deadly. But by my own hands, it will bend. For I am Corvus, son of Karne! I will control the Abyss and I will save this Realm! For the Magistrate.