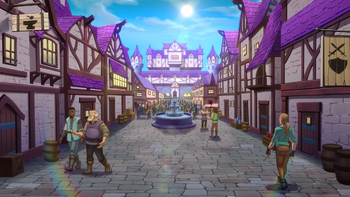 Crosswind Hold during its Golden Age

Trials of the Realm Bios

Stone Keep
"Stone Keep is the birthplace of the Magistrate, formed in the very location from where the Second Goblin Scourge was repelled by the first iteration of the Paladins, the Realm's Champions."[1]

The Archives
"The Archives contain far more than dusty tomes and antique scrolls. It houses histories and magics long forgotten by the Realm, insights to the nature of the Abyss, and some of the more enigmatic discoveries of the Deepwerks."[2]

Splitstone
"The bulk of the crystals in use throughout the realm were sourced from Splitstone Quarry. Most of its inhabitants are Goblins, now peaceful, who have found lucrative work in the mines of the Realm."[3]