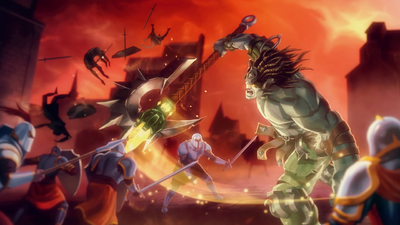 Following the end of the previous threats against the Realm, a Golden Age of peace overtakes the Realm. That is, until a discovery is made that changes everything.

Thanks to the efforts of the Warders and the Paladins, the Realm was no longer subject to the threat of the dragons or the Goblin Scourges, and could now finally enjoy a period of peace. The Warders assumedly would leave for their island home of Warder's Watch, while the Stagalla that had been created to assist the Paladins would enter a deep slumber until they were needed again. The Paladins themselves, would disband, seeing no need for a group of warriors during a time of peace.

Many Paladins went back to live regular peaceful lives, while others joined the Magistrate, a newly created group composed of former Paladins and powerful magicians; led by the former Paladin Karne, the group would govern the Realm as the Golden Age of peace continued for nearly a century.

There were accidents, tragedies, horrible misuses of power, such as entire buildings being destroyed in massive explosions. Karne feared this would threaten the peace of the Realm and risk sending them back to chaos and war once again, as had been the case nearly a century ago. The decision was made: crystals would be banned from public use to ensure peace remained. Some individuals, such as Viktor, agreed with Karne, believing this choice would allow things to remain peaceful, while others, such as Tyra, disagreed with the Magistrate, be it out of fear or distrust.

One notable individual opposed to this decision was Valera, the leader of the Paladins who had previously fought alongside Karne. Many individuals rallied behind Valera, who believed crystals had the potential to improve everyone's lives.

Meanwhile, the Magistrate had begun to set out collecting as many of the crystals as they could. In response, the newly formed Resistance weaponized crystal magic with the intent of using it against the Magistrate. Valera would also reawaken the old Stagalla and make them fight for her cause. When the Magistrate came to collect more crystals, the Resistance struck.

At first, the Magistrate soldiers were easily overpowered by the Stagalla known as Terminus, but things soon changed once Ash, the War Machine appeared, easily destroying and seemingly killing Terminus in a single shot, shattering not only the Stagalla, but the Resistance's morale as a whole.

However, the remaining Stagalla, Inara, angered at having witnessed her former partner destroyed, rallied the Resistance, restoring their resolve to fight. The group would find others willing to join their cause, such as Ying, Sha Lin, Cassie, and Tyra, with Valera urging the group to take up the flag of ancient Paladins. Meanwhile, the Magistrate also made their own preparations, calling on all loyal houses such as House Aico to assist them in their battle. With this, the Crystal War had officially begun.

The war continued to escalate, drawing the attention of various individuals joining the battle to protect their people or to protect nature itself, such as Grover, Moji, Makoa, Grohk, Willo. Other individuals joined for more selfish reasons, such as taking contracts from both sides to maximize profit, such as Kinessa, Maeve, and the Thousand Hands Guild. Finally, there are those that despite the escalating conflict, seem to largely ignore the war.

Of course, future battles between the Magistrate and Resistance would continue to grow more and more extreme...

This information comes from the A Realm Divided lore cinematic (linked below), this dev statement, Imani, Barik, Inara, Lian, Fernando, Grover, Moji, Grohk, Willo, Kinessa, Maeve, and Zhin's bios, this loading screen tip, one of Rei's teasers, this dev statement, and the Trials of the Realm description for Brightmarsh,