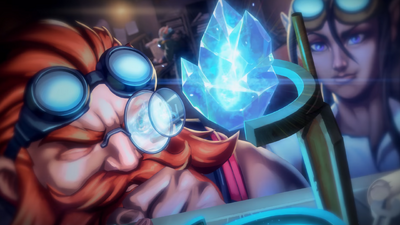 Crystals are a new type of magic utilized through crafted crystals; they contain power that rivals that of the Magistrate, and their uses are near limitless. A crystal-powered revolution overtook the Realm following their initial discovery, with the Magistrate facility Deepwerks in particular, creating a number of devices, such as crystal-powered mining suits and even pairs of wings; the Realm's future looked brighter than ever.

But soon there were accidents and horrible misuses of power; tragedies the Magistrate feared would send them back to the chaos and destruction of times past, causing them to ban crystals from common use.

While some agreed with this choice, others feared or distrusted the Magistrate. A group rallied behind Valera, leader of the former Paladins. They stood opposed to this decision, believing crystals had the power to improve the lives of everyone. Together, they formed the Resistance, and after weaponizing crystals, went to war with the Magistrate, resulting in the appropriately named Crystal War.