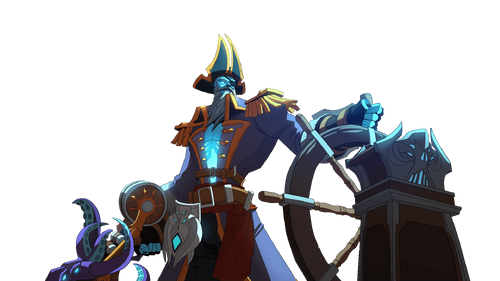 Dark Tides is an event to celebrate the release of a new champion, Dredge, and to expand Paladins' lore. This event began on September 27, 2018.

Hushed whispers tell of Dredge’s exploits on the eight oceans -- and of the treasures he has hoarded away. Not even death could stop the Admiral of the Abyss, now borne back into the world atop the horrid tentacles of the Abyss. Beware, all who dare sail his seas.

All knew fear when sailing the 8 oceans of the Realm. Admiral Dredge took as he wished and those few who survived spread the tale far and wide. But even Dredge, mighty as he was on the open seas, had his limits...until the Abyss found him.

The Abyss' most unsightly monsters have been dredged up und are invading the Realm! Expel these Abyssal Echoes from matches before they can escape, collecting the Dark Doubloons that linked their spirits to our realm. The Merchants of the Dark Exchange may have interest in taking them off your hands.

The Resistance rejoiced. The Warder's Relics were secured and with that victory.

Until he attacked. The most feared pirate of The Eight Oceans. Drawn to the ancient power the Resistance carry. On the open water none could challenge Admiral Dredge. The Resistance were routed, the weapons seized for Dredge's treasure board.

A dragon chooses its master and Dredge was found lacking. He sank into the depths until he was leagues from the land of the living, but the pirate was far from death. The Abyss bore Dredge back into the Realm on top of its bearing tentacles.

The undead admiral sails the seas again and none would take his treasure.

During the Dark Tides Event every Siege, Team Deathmatch, and Onslaught game will have a 25% chance to spawn one of four Abyssal Echos during the match. These Abyssal Echos are Boss variations of the exclusive Dark Tides event skins, featuring unique movesets and voice lines.

Once an Abyssal Echo appears, players will have a short time to defeat the Echo before it tears open a portal and escapes to the Abyss. Destroying Death Speaker Ying, Knightmare Fernando, or Day Walker Vivian will award every contributing player 1 Dark Doubloon

to spend at the Dark Tides event store, the Dark Exchange.

Careful! There have been sightings of a rare Abyssal Echo howling in the night. Defeat Full Moon Viktor and you’ll find yourself with a special Gold Doubloon

can be exchanged for Limited Special Variations of the Dark Tides skins – available only during this event.

These are the items that are available during the event. Each bundle costs 500 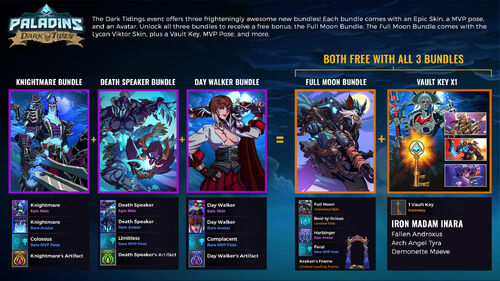 Crystals at the Event Store to get legendary, epic and rare exclusive items. You will be able to spend your Doubloons after purchasing one of the bundles. 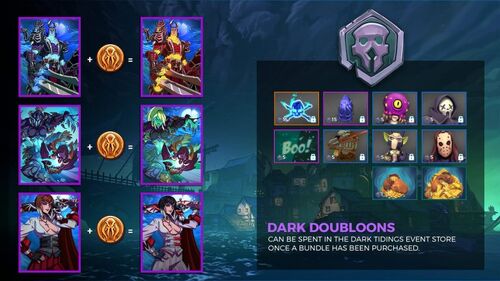 Vault Key to get new epic, exclusive skin or to unlock past Exclusive Event Skins. You will get your

Complete quests to earn treasure chests, Spray and Title as bonus rewards. Progress can be made for all quests at the same time.