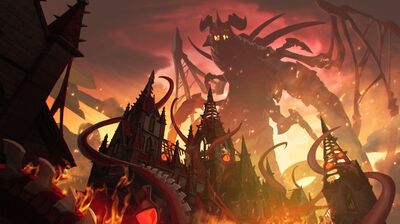 The Darkness Arc (also referred to as the Corruption Arc[1] and the Shattered Desert Arc[2]) is the second major story arc in Paladins, and the first to receive a conclusion. This story arc focuses on the Darkness, a universe-subsuming threat from beyond the Realm that eats and spreads and was responsible for shattering the moon, and the Realm's attempt to stop it from consuming everything.

Major characters in this arc include Atlas, Corvus, Vora, and Yagorath, with other notable characters including Azaan, Io, Jenos, and Octavia.

This arc was first foreshadowed in Siege of Ascension Peak early in 2018, with the arc properly beginning with the release of Atlas around a year later; the arc then continued on until the release of Azaan in late 2021. 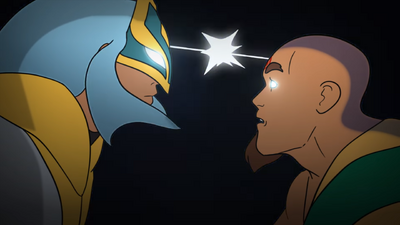 Following the end of the Second Goblin Scourge, the young monk, Jenos, would climb Ascension Peak with a group of followers, in search of greater wisdom. Jenos would find what he was looking for in the stars, and ascended into the cosmos, where he remained for almost a century.

While in the stars, Jenos spoke with the moon, Io, and learned of the universe-subsuming threat from beyond the Realm, the Darkness. However, Jenos initially believed this force to be the Abyss. Regardless, with this information, Jenos would eventually return to the Realm, sharing what he saw with the broken soldier, Buck, before beginning his plans of combating the oncoming threat.

Jenos would first journey to Warder's Watch, where he would light the beacon of the Warders. However, with the Warders long since vanished, none were left to answer the call, and the power of the beacon only served to attract the Magistrate and Resistance into yet another battle.

Meanwhile, news of Jenos' return had reached House Aico, causing the Scion of the House, Lian, to devise a secret plan to recruit the self-proclaimed god into her ranks. She tasked her Primus, Khan, with bringing him back, however, once Jenos returned to Ascension Peak, he refused Khan's offer and sent his troops flying, beginning Siege of Ascension Peak.

Back at Warder's Watch, the Resistance had emerged victorious, they sailed away from the battle, now carrying a pair of Warder Gauntlets; though this would be short lived, as Judd Roberts, also known as Admiral Dredge, the most feared pirate of the Eight Oceans, attacked the group, easily stealing the gauntlets from them.

However, the Warder dragon sensed Judd in possession of the gauntlets and deemed him unworthy of wielding them, attacking the pirate and easily defeating him, sending him down into the depths of the ocean. Though this would not be the end of the pirate, as deep below the waves, Judd encountered Abyssal Lord Dredge, who revived the pirate as the Admiral of the Abyss. Dredge would reclaim the gauntlets once more, later docking at his hideout of Marauder's Port.

Into the Shattered Desert[]

As it would turn out though, not every Warder was gone, as the beacon had attracted Imani, the supposed last of the Warders. Though upon arriving at the beacon, she found her gauntlets missing, as well as traces of the Resistance, believing they were the ones who had lit the beacon. First, Imani would find Dredge in his hideout and easily defeat him and take back her gauntlets, before journeying to the Resistance's base, ready to fight against the approaching threat, which Imani too, believed to be of the Abyss.

Valera, leader of the Resistance, revealed they had not lit the beacon, and soon after, Jenos appeared, having just finished fighting off the last of the siege, and now revealing himself as the one who had lit the beacon, as well as sharing his warning of the oncoming threat. The Resistance would then decide to head into the Shattered Desert, Jenos and Imani accompanying them.

In the dunes, the Resistance struggled to see through the harsh sandstorms, but eventually stumbled upon an odd tear in reality, before later spotting Magistrate forces in the distance, led by the officer Corvus. The two sides would then seemingly battle over these strange tears.

Following this, the Resistance encountered Atlas, who had arrived from a dark future, one where an otherworldly corruption known as the Darkness had spread across the Realm, consuming and destroying almost everything. After Atlas' resistance group's last stand against the monsters failed, Atlas became desperate, studying crystal magic to manipulate the flow of time, which he hoped to use to prevent the Darkness from growing as powerful as it had become; Atlas studied tales of the past for a possible source, learning that the monsters originally shattered the moon before becoming trapped within its shards by Io, but Atlas was eventually forced to travel through time early when cornered by the beasts, leading to his current arrival in the Shattered Desert.

With his knowledge of the future, Atlas led the Resistance to Bazaar, a city inhabited by the Followers of Io, where they encountered the Magistrate forces once more and naturally fell into battle yet again. The fight was intense, with the city itself becoming heavily destroyed from the crossfire. The Magistrate seemingly had the upper hand, leading to Valera and Jenos begging for Io herself to appear and join the battle, which eventually, she did, attacking Corvus and chasing off the Magistrate. With this, however, Atlas had succeeded in preventing the Magistrate and Resistance from unintentionally breaking the Darkness free and dooming the Realm. 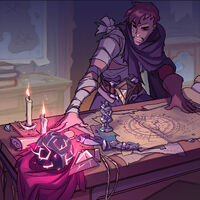 Following his near death experience in Bazaar, Corvus became desperate, believing the Resistance had recruited Io and Jenos to their side, thought the Magistrate would soon be crushed under their cosmic power. The Abyss took advantage of his desperation, with Seris appearing before him, offering him an Abyssal Lord under the Magistrate's control; Corvus recklessly accepts the offer out of desperation, summoning Raum, Rage of the Abyss, into the Realm. However, Raum would not be controlled by anyone, and left to cause destruction, later being challenged by the Tigron warrior Tiberius and battling to a draw.

Corvus, meanwhile, would be tried for his crimes and exiled from the Magistrate. However, he wouldn't let this stop him, as with those still loyal to him, he intends to control the Abyss, defeat the Resistance, and bring peace back to the Realm once more. Some individuals from both the Magistrate and Resistance, such as Strix and Tyra, would grow suspicious of what was going on behind the scenes and attempt to investigate.

Meanwhile, deep in the Shattered Desert, away from the city of Bazaar, lies the ancient seals that held the Darkness; these seals were guarded by a martial group of warriors devoted to Io. However, with the recent battle of the Magistrate and Resistance, the guardians found themselves the victim of many crusades, leading to almost every single one of them dying.

Only one warrior remained, a girl called Vora. She had been devoted to Io her entire life, heard stories about how much she loved them, how she watched over them, even when shattered and not herself. But, forced to watch her fellow warriors die, with Io nowhere in sight to assist them, Vora had a change of heart. She saw the gods, who appreciated you when useful, but ignored you when convenient, she saw the Magistrate and Resistance, both claiming to fight for justice, but had brought their petty war to their peaceful desert and then left without picking up the pieces of the town they had damaged in their battle. Vora came to the conclusion that everyone is a pawn in a grand game of chess between the gods and large factions, everyone is disposable, replaceable, and doesn't matter. Seeing this as a vicious cycle of abuse, Vora broke her promise, opening the seal that contained the Darkness, granting her its power and turning her into its herald. 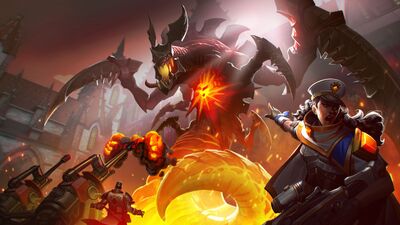 With her new power, Vora set off to accomplish her goals of destruction, returning to her hometown of Bazaar and destroying the large center statue of Io, and later coming into conflict with Atlas and his future father Lex. However, it was not just Vora that needed to be worried about.

The Darkness from within the seal had fully emerged, Yagorath, the Devourer, after centuries of being sealed away, it was time to continue her goal and consume the Realm. In an attempt to prevent this, Atlas rallied as many champions as he could, bringing them into the Shattered Desert to fight the beast. Though the battle seemingly ended with Atlas' loss, as Yagorath and Vora left the desert and began causing destruction elsewhere.

Vora would remain in the southern part of the Realm, attacking those deemed as threats to their plan, such as the legendary assassin Vatu.

Yagorath, meanwhile, would leave a trail of destruction towards the north of the Realm, constantly attacking and being attacked by several different champions. Eventually, she would arrive in Crosswind Hold, where she'd face the full force of the Magistrate, at one point even facing off against Grand Magister Karne himself.

Despite all this, Yagorath continued to cause chaos and destruction, growing larger and stronger. However, in one battle against the Magistrate commander Octavia and the Angel of Vengeance Furia, Yagorath would be intercepted by Azaan, the Eternal. Azaan had sensed the Abyss' influence growing stronger with the recent introductions of Dredge and Raum into the Realm, and so he descended, easily defeating Yagorath after a year of her rampage and giving the Realm its final warning: deal with the Abyss, or have it be dealt with, by any means deemed necessary.

However, despite being defeated, Yagorath may return to finish what was started in the future. For now though, the Realm is largely safe from the Darkness' corruption.