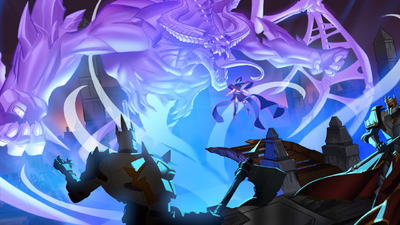 In an effort to prevent a catastrophe, the Magistrate offers the Abyss a sacrifice, however, things soon go horribly wrong.

On the surface, the village of Seris would appear to be nothing more than a quaint and peaceful town, but just beneath that surface, lies an ancient dark evil, a portal to the Abyss.

But being a common girl, Sarah couldn't hope to defeat either the Magistrate or the Abyss, resulting in her sister being taken away for the sacrifice; the Magistrate officer who came to collect Abby, Corvus, offered Sarah a lock of her sister's hair as a memento. With nowhere left to turn, Sarah retreated to a church of the Eternal Pyre, praying for guidance, for her sister's soul, and most of all, for the strength to fight the Abyss, so that no one else would fall victim to them again.

Meanwhile, the sacrifice had begun. However, once the Abyssal Lord Seris entered the Realm, it became clear the Abyss did not hunger for a soul, but for a body. Taking the body of Abby, Abyssal Lord Seris would proceed to destroy the entirety of the village in a massive Abyssal explosion, leaving almost no survivors. From the ashes of the village though, emerged the sacrificial girl, now known as Seris, Oracle of the Abyss. The Magistrate commander, Corvus, would similarly survive thanks to an unknown force.

Finally, as the village was destroyed, in the Church of the Eternal Pyre, Sarah's prayers were answered, and she was transformed into Furia, the Angel of Vengeance; she would do what no one else had done before, she would stand against the Abyss. She would instantly leave and journey into the Abyss itself, where she would take her vengeance on the Abyssal Lord that destroyed her home, seemingly killing it in a single blast.

Following this, Furia would seemingly join the Resistance in a quest for vengeance against Corvus, assisting the group in various other battles...

This information comes from Furia and Seris' bios, the Rise of Furia lore cinematic (linked below), Furia's various Twitter teasers (also linked below), Corvus' teaser trailer, and these dev statements.