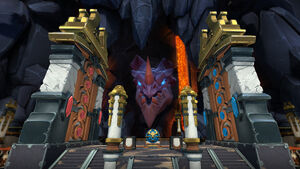 Dragon's Call was one of the maps in Paladins and was originally released in the Paladins 1.4 update. With the Paladins 1.6 this map and the event it was introduced with were both later removed from game.

This map has a mirrored layout and is designed for 2 teams of 4 players. The Warder's Key spawns in the center of the map. This object could be used to score points, though picking it up prevented the carrier from using abilities or being healed, due to its immense power.

The only Game Mode that was playable on this map was Dragon's Call.

One of the locations of the ancient Warders, this place is now abandoned, no Warders left. It wouldn't be until Jenos lit the Warder's Beacon, hoping to rally a group to aid him against the Darkness. With no Warders left, however, only the Magistrate and Resistance came to the beacon, attracted by its power. After a battle between the two sides, the Resistance emerged victorious, taking the Warder's Relic for themselves, until they were attacked on the open seas and robbed by Dredge.