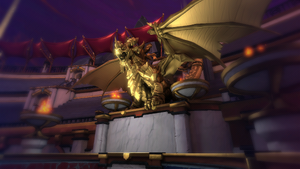 Dragon Arena is one of the maps in Paladins and was released in the Paladins 1.8 update.

It was released for the Dragon's Call event. But now the only Game Mode that is currently playable in this map is Team Deathmatch.

Trials of the Realm Bio:
"At an elevation befitting its name, Dragon Arena once hosted magnificent bouts between some of the most powerful beings in the Realm for sport. Now, fights there are for a different purpose."[1]

Other Information:
The Dragon Arena is a location where the ancient dragon masters, the Warders once honed their skills, as revealed here.

This surrounds the outside perimeter of the map, making champions with knockback abilities ideal for easy eliminations. Champions that lack flight/teleportation abilities are susceptible to being launched off the map without having any sort of means for recovery...

Found on both sides of the map where the teams initially spawn. Entering these portals will teleport a champion to a predetermined exit point, making them ideal for ease of access to locations that would normally take awhile to get to on foot.

They exist in 2 locations on the map which are bringing you to the Power Up.

Spawns in the center building on the map and will grant full Ultimate Charge to the champion that picks them up.