Admiral of the Abyss

Admiral Judd Roberts ruled the eight oceans as the Realm's most-feared pirate, until one final treasure led to his doom. The admiral stole the Warders' relics from the Resistance, but could not tame the dragons' might. His ship was destroyed, his crew scattered, and he sank to certain death in the oceans' depths.

The Abyss intervened and bore the admiral — now Admiral Dredge — back into the Realm of the living. Now the undead pirate travels the seas again, and no soul, living or dead, will take his treasure from him.

Fire Abyssal mortars every 0.7s that bounce and explode, dealing 850 damage. Reloading fires a secondary projectile that deals 850 damage on impact. You deals up to 200 self-damage if caught in your own explosion.

Fire a burst of up to 3 depth charges over 0.3s that each deal 950 damage in an area. These charges arm when they hit the ground, slowly rising and exploding after 2s

Create shortcuts that allow you to traverse through the Abyss.

Launch a powerful harpoon that pierces enemies, dealing 800 damage and slowing them.

Unleash the Abyssal Kraken on your enemies to deal 2500 damage and knock back anyone caught in its tentacles.

Paladins in 90 Seconds - Dredge, Admiral of the Abyss

Paladins - Behind the Scenes - Dredge, Admiral of the Abyss
Add a photo to this gallery 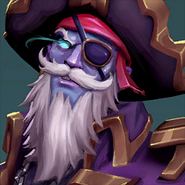 Dredge's in-game profile
Add a photo to this gallery

Retrieved from "https://paladins.fandom.com/wiki/Dredge?oldid=8738"
Community content is available under CC-BY-SA unless otherwise noted.