Born wingless as a mere wyrin underling to a vicious dragon, Drogoz escaped his servitude using a pair of crystal-fueled mechanical wings crafted by a dwarven engineer. The draconic blood in his veins flowed with cruelty and greed, compelling him to continue on a Realm-wide rampage of destruction as he amassed his own hoard, one that will rival that of the true dragons.

As the conflict between the Magistrate and the Resistance rages, Drogoz streaks through the sky above, swooping down to deal with his foes as quickly — and as violently — as possible.

Bombard lesser creatures with explosive rockets that deal 1000 damage per shot every 1 second.

Spit out an unstable loogie. Enemies hit by your flammable saliva take 150 damage and receiver 30% additional damage from your attacks for 4s.
Bonus damage: You may shoot your Fire Spit, causing a large explosion that deals 1000 damage.

Pre-load all of the rockets from your magazine into your launcher. Your next fire will release all of the pre-loaded rockets. These rockets create larger explosions and deal 250 damage per shot. Deals 200% more damage to shields.

Jet upwards into the air. Hold Space to use your booster.

Unleash your fury and overclock your thrusters to deliver a high velocity punch that deals 100% of your target's maximum health as damage.

Card description
Restore 20% of your maximum Booster Fuel when you get a kill or elimination. 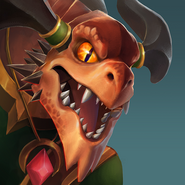 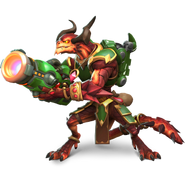 Retrieved from "https://paladins.fandom.com/wiki/Drogoz?oldid=8754"
Community content is available under CC-BY-SA unless otherwise noted.