Difference between revisions of "Evie"

Evie is a Flank Champion in Paladins, added on December 3rd, 2015.

After cleverly tricking and imprisoning a greater frost elemental in a magical gemstone, Evie went from apprentice sorceress to Winter Witch seemingly overnight. Though no longer welcome in her home village, which she left to an uncertain fate, she found her talents to be in high demand in the Resistance's conflict with the Magistrate.

Though powerful, her true motivations are as mysterious as the exact details of her background, causing her allies to question her loyalty as well as how long she can really hope to keep the vengeful elemental contained.

Evie is a flank champion with very high mobility. Her weapon, the Ice Staff, lets her fire high damage explosive shots every second. Her two movement skills, Blink and Soar, allow Evie to appear and disappear behind enemy lines and wreak havoc, while Ice Block gives her up to three seconds of invulnerability. Her ultimate skill (Ice Storm) will damage, slow, and cripple enemies in a large area. This provides her with a strong teamfight and zoning tool. However, Evie has a low Health pool and heavily relies on her maneuverability to stay alive. Managing her cooldowns well can turn her into a fearsome flank.

Increase the damage you deal with your weapon shots by 20% for 3s after Soar ends.

Ice Storm has its damage increased by 100% and its Ultimate charge decreased by 50%, but its duration is reduced to 3s.

Blink can be refired within 4s of its use to return to the initial casting location.

This is a list with all cards available to Evie:

All of the following cards are in Evie's pre-built loadouts: 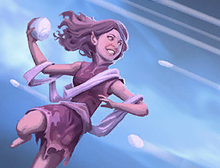 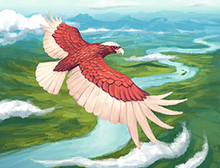 Increase the duration of Soar by 1.5s.
3 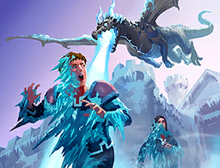 Reduce the Cooldown of Soar by 100% after getting a Killing Blow.
5 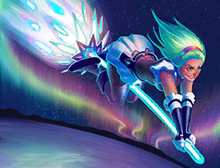 Increase your Movement Speed during Soar by 15%.
3 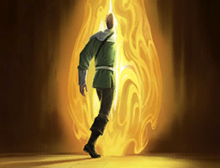 Increase the distance traveled by Blink by 12%.
2 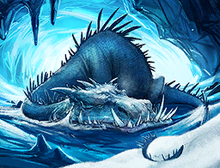 Reduce the Cooldown of Ice Block by 1s.
1 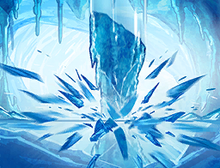 Reduce your active Cooldowns by 40% after getting a Killing Blow.
4 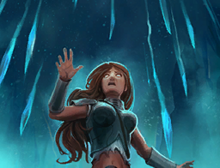 Increase your Movement Speed during Soar by 15%.
3

Increase the distance traveled by Blink by 18%.
3 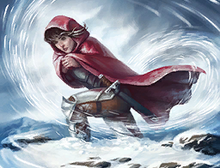 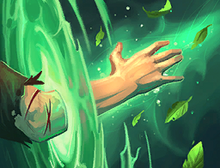 Increase your Movement Speed during Soar by 20%.
4

Increase the distance traveled by Blink by 24%.
4

These are the Cosmetic Items currently available for Evie: