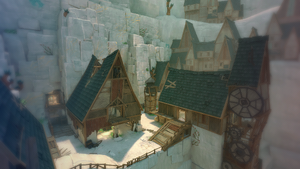 Foreman's Rise is one of the maps in Paladins and was released in the Paladins OB60 update.

The Game Mode currently playable in this map is Onslaught.

Foreman's Rise is the second mountain-related map of the goblins, being located directly above Splitstone Quarry (as can seen by looking down the cliff), and also seems to be the goblin miners' living spaces.

Due to the map's position on the official map of the Realm, as well as it being visibly next to Splitstone Quarry, it is likely this map is also part of Crosswind Hold alongside Splitstone, as mentioned in Trials of the Realm.

Due to its close proximity to Splitstone, as well as Foreman's having the same aesthetic as it, it's assumed Foreman's Rise is also a gold mine, as mentioned here and here, with the latter mentioning it's not a crystal mine, with the crystals champions use generally not coming from this area.

Can be seen along the outside sight lines of one of the flank routes outside the capture point making champions with knockback abilities ideal for easy eliminations. Champions that lack flight/teleportation abilities are susceptible to being launched off the map without having any sort of means for recovery...

Can be found on the inner flank route next to the capture point on either side. Standing on either one will lift the champion standing on it to the higher platform leading to the overlook of the point. Unless your champion has any sort of flight/teleportation abilities, using the elevators is the only way to get up to the overlook platform...