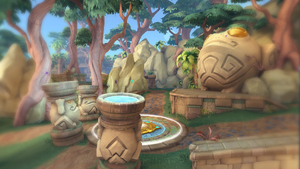 Frog Isle is one of the maps in Paladins and was originally released in the Paladins CB30 update. It later received a visual rework in the 3.2 update.
Like every Siege Map, Frog Isle also has certain callouts.

Trials of the Realm Bio:
"It is hard not to revel under the joyful statues of Frog Isle. Those that visit the island are blessed with renewed purpose, as if any disappointment of what was lost is replaced with pride for what can be once again."[1]

Other Information:
It was shown in Trials of the Realm[1], Frog Isle is also part of a larger area known as the 'Temple Isles', alongside Jaguar Falls and Serpent Beach, as well as Primal Court, as can be seen in both maps of the Realm.

In the Sands of Myth update, Frog Isle received a visual rework.

When it comes to the Frog Isle rework, the primary goal was to push the environment quality up to the high bar we’ve established for the more recent maps. The secondary goal was to add a lot of frogs; we wanted to make sure the map finally lived up to its name. We wanted clear contrast between bricks and trims, between walls and floors etc. This was to combat some of the washed out, samey feel of the original map. We also desperately wanted to replace the low poly rocks used throughout the tropical art set with something a little more stylized. Frog Isle was one of our earliest maps and I’m happy to have had the opportunity to finally give it a makeover. -Alex M, Environment Artist