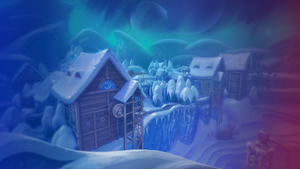 Glacier Keep was one of the maps in Paladins and was released in the Paladins CB15 update.

At a later point, two of the individual sections would eventually be turned into their own standalone maps, while the third section was removed altogether for an unknown reason.

"One of the key strongholds during the Goblin Scourge, Glacier Keep stands to this day on the borders of the Frozen North. It originally belonged to a different noble family, but House Aico still keeps it manned in respect for the long departed."[1]

This location is part of a bigger area known as 'Aico Tundra' alongside Ice Mines and the Ruby Throne, as revealed in Trials of the Realm.

The old in-game map itself is unlikely to be completely canon, though Glacier Keep is still the name of a canon location in the Realm, as can be seen in the Trials of the Realm.

Because of this map being removed, it is unknown if the lore location known as "Glacier Keep" refers to the removed third section of this map specifically, or another unseen area.