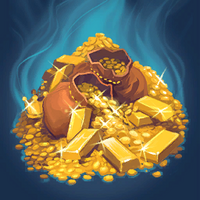 Gold is a type of currency in Paladins. Gold can be used to unlock Champions and to purchase certain Cosmetic Items. Gold can be boosted by active Party Boost and purchased Event Pass.

for the first two matches of each game mode. Players can also receive gold through the Event Pass. Players who unlock the Paid Rewards gain +50% boosted

Gold can also be earned from the Refer-A-Friend system.