Being struck by lightning once is usually more than enough to kill someone, but after dozens of strikes, Grohk was still standing. Though it took a while to realize Grohk had been imbued with the power to control the lightning itself, he put it to good use defending his tribe from a goblin attack that would have otherwise destroyed them. Seeing his power as a sign from the weather spirits, the rest of the Red River orcs immediately appointed him their chieftain.

When the Realm erupted into civil war, he sensed another storm brewing and joined the battle on behalf of his tribe.

A staff that creates a channeled beam of lightning dealing 75 damage per hit every .1 seconds. The Lightning Staff cannot be manually reloaded and instead recharges when not firing. Effective up to Medium Range.

Fire a projectile that deals 125 damage and bounces between enemy players slowing them by 30% for 2s.

Become untargetable and gain 20% movement speed for 1.5s. Removes all debuffs on use.

Deploy a totem with 1000 health that heals nearby allies for 420 Health every second and lasts 6 seconds.

Surge with power for 3s, slowing and striking 2 nearby enemies at a time for 200 damage and speeding up and healing yourself and 2 nearby allies for 500 health every .5 seconds. 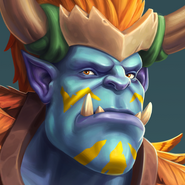 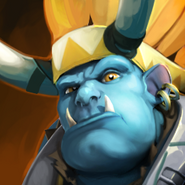 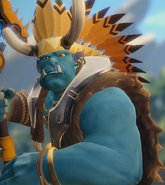 Add a photo to this gallery
Retrieved from "https://paladins.fandom.com/wiki/Grohk?oldid=8548"
Community content is available under CC-BY-SA unless otherwise noted.