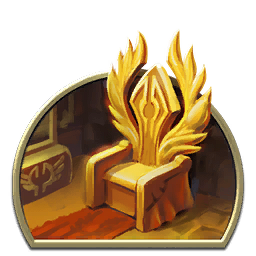 House Aico is a royal house loyal to the Magistrate, ruled by the heiress and Scion of the Ruby Throne, Lian. It's a well-established house, having connections all the way back to the original Paladins with the champion "Aico", who even had Ice Mines pledged to them following the Second Goblin Scourge.

According to Lian's bio, House Aico is not normally present in the Realm, but instead resides in a far off land.

As seen in the official map of the Realm, House Aico appears to be located near the maps Ice Mines, Frozen Guard, and Snowfall Junction. It was later revealed this cold area is known as the 'Aico Tundra', and that House Aico owns Ice Mines and Glacier Keep. It is unknown if they also own Frozen Guard and Snowfall Junction, though, considering the name of the larger area, it is likely they do.

"House Aico controls the Ruby Throne and stands as one of the most influential noble houses of the Realm. Sitting on the Throne is the head of the house, Lian."[1]