"Tread lightly, for this is hallowed ground!"

Long ago, there was chaos and war. Dragons ruled the Realm, and mankind was left to fight over the scraps that remained. But one wise mage studied the ancient beasts’ secrets. She established the Warders and commanded the power of a dragon for the good of the people.

It was that Warder’s actions which paved the way for the Paladins’ golden age of peace. The Warders were thought to be dead and gone, a relic of a bygone age. But a beacon was lit in their ancient homeland, a call that the Warders were needed once again… If there were any left.

Imani answered that call. Little is known about the Last Warder’s past before she appeared in Dredge’s treasure trove to recover her relics, but one thing is sure: She will uphold the legacy of her lineage and stand against the darkness. 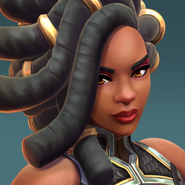 Imani's in-game profile
Add a photo to this gallery

Retrieved from "https://paladins.fandom.com/wiki/Imani?oldid=8586"
Community content is available under CC-BY-SA unless otherwise noted.