For eons, the moon goddess Io watched over the Realm. Then, disaster struck: the Darkness smothered the goddess's light and shattered the moon that hung above the lands.

Pieces of the moon fell to the Shattered Desert, where Io's faithful watched over them. They kept vigil for the shattered goddess, praying that one day she would return to guide them.

As the Magistrate marched on the desert sands, intending to claim the power of the moon shards in their vicious struggle with the Resistance, that day finally came. At the urging of her celestial contemporary, Jenos, Io revealed her true form to fight for her people and stand against those who would threaten their survival.

Channel the healing power of the moon to restore an ally, healing for 150 every 0.15s while channeling.

Quickly leap backwards and upwards through the air.

Summon Luna to your side to unleash your wrath against enemies hit by your bow, dealing twice 180 damage and a third time 350 damage.

Project an ethereal manifestation of Luna and carry away enemies in its path, removing them from your Realm and dealing 800 damage to them if they collide with a wall.

Paladins - Champion Teaser - Io, The Shattered Goddess
Add a photo to this gallery 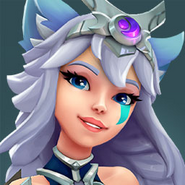 Io's in-game profile
Add a photo to this gallery

Retrieved from "https://paladins.fandom.com/wiki/Io?oldid=8830"
Community content is available under CC-BY-SA unless otherwise noted.