Jenos was merely a young monk in search of greater wisdom, and a reprieve from the ravages of the Second Scourge, when he climbed that mountain many generations ago. He found his answer written among the stars, and ascended into the heavens to dedicate himself to it. He vanished for many years, leaving behind only a small group of followers who were dedicated to carrying on his legacy in the Realm.

Now, as the Realm descends into war once again, so too has Jenos descended from the stars to walk upon the ground once again, joining the battle for some arcane purpose that only he understands.

An otherworldly weapon that channels the power of the stars. Deals 120 damage every 0.13s at medium range.

Apply a celestial blessing through all obstacles, healing for 250 Health every second for 10 seconds.

Lower your weapon and move 75% faster while increasing your jump height and lowering your fall speed.

Channel gravitational energy and lift an enemy up, dealing 150 damage every second for 2.5s. If the victim manages to move while lifted it will interrupt Void Grip.

Through Time and Space

Lock yourself in place and gather the power of the cosmos for 1.5s becoming CC immune, then unleash your energy in a long range blast that pierces through all obstacles and deals 2400 damage.

Paladins in 90 Seconds - Jenos, the Ascended
Add a photo to this gallery 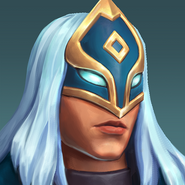 Jenos' in-game profile
Add a photo to this gallery

Retrieved from "https://paladins.fandom.com/wiki/Jenos?oldid=8782"
Community content is available under CC-BY-SA unless otherwise noted.