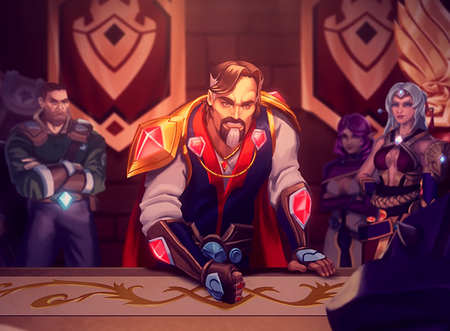 Karne was once a member of the original Paladins that ushered in the Golden Age of peace, later being made Grand Magister of the Magistrate. Now he finds himself in direct conflict with his former ally, Valera, over the discovery and dangers of crystals.

Long ago, the Realm was in chaos; though the dragons had been dealt with by the Warders, a new threat kept the Realm in chaos: the Goblin Scourges. The northern side of the Realm was the victim of this chaos, and in response, a group of warriors, the Paladins, came together to end this threat, with Karne, a powerful mage, being one of the most notable members, alongside the leader of the group, Valera. After two of the scourges, along with the assistance of the newly created Stagalla, the Paladins fought back the goblins and had finally brought peace to the Realm.

With no more threats, there wasn't any need for a group of warriors, and so, their job fulfilled, the group disbanded, and a new organization, the Magistrate, was created. An assembly of former Paladins and powerful sorcerers, led by Karne himself as Grand Magister, with much hard work, the Realm entered a Golden Age that continued for nearly a century.

However, a new discovery was made that would begin the end of this peace; a new form of magic focused through crafted crystals with near limitless potential for technological advances; a crystal-powered revolution overtook the Realm, with many fantastic new inventions being created. However, not everyone had the purest of intentions.

Accidents, power-hungry individuals, loss of life and misuse of power threatened the peace and safety of the Realm. Karne, fearing these accidents and individuals would send them back to chaos and war from time's past and destroy everything that had been built, decided to outlaw crystals from the general public; hoping to keep the Realm peaceful.

However, not everyone agreed with Karne, including his former ally Valera, thus resulting in the creation of the Resistance, beginning the Crystal War that still affects the Realm to this day.

Karne would later exile his own son, Corvus, from the Magistrate in response to Corvus being deceived by the Abyss into summoning the Abyssal Lord Raum into the Realm and causing massive amounts of destruction.

Following the release of the Darkness monster Yagorath, Karne would step up to fight the beast himself.

After Azaan descended into the Realm and resealed Yagorath with ease, Karne believed he had failed; deciding to step down after a century of being Grand Magister, while entrusting leadership of the Magistrate to House Aico. It's unknown what happened to Karne following this.

In the Lost Future, Karne would be killed seemingly by Yagorath herself.

Paid for by the Magistrate for a better Realm