The Patriarch of House Aico issued a challenge to his captains: keep the house's banner upright for the longest amount of time. Men strong enough to toss lesser men across the battlefield tried, but few were strong enough to last even a day with the banner in-hand.

The last captain to attempt the test, a young man named Khan, held the banner in his hands for hours. As his arms tired, he beckoned to a common servant and tasked her with taking the banner from him and keeping it upright.

"Even though I must fall," he said, "the banner will remain."

Thus he passed the test, for this was no test of strength, but one of loyalty to House Aico. Khan proved himself worthy of command with his actions that day. Now, he serves Lian as advisor and protector, a steadfast supporter of House Aico.

Activate your gauntlet’s Bulwark with 6000 Health. Regenerates while inactive.

Let out a fearsome Shout, briefly granting Damage immunity to yourself. Additionally, heal yourself and nearby allies for 800 health.

Target an enemy and drag them to you. You may move your powerless victim as you see fit or send them flying with a mighty blast.

Paladins - Behind the Scenes - Khan, Primus of House Aico
Add a photo to this gallery 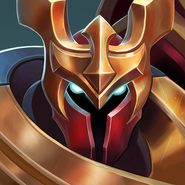 Khan's in-game profile
Add a photo to this gallery

Retrieved from "https://paladins.fandom.com/wiki/Khan?oldid=8759"
Community content is available under CC-BY-SA unless otherwise noted.