Once, a nameless street rat challenged the tyrant Zhin. For the boy's remarkable skills, Zhin granted him a new life in the Thousands Hands Guild, and a new name: Koga. The Guild was Koga’s family and he became their finest ninja. But not all families get along. Jealous lies spread, false evidence was planted, and Zhin's fury forced Koga to flee. Now the exiled ninja fights for his new family — The Paladins — as he searches for the one who betrayed him.

Unleash your Hellkite Claws. While in this stance, you are constantly consuming energy.

Move 50% faster for 4s. Consumes 1 unit of energy. Passive: Hold Space when running into a wall to climb it.

Paladins - Behind the Scenes - Koga, The Lost Hand
Add a photo to this gallery 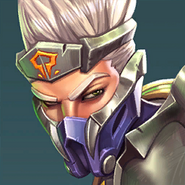 Koga's in-game profile
Add a photo to this gallery

Retrieved from "https://paladins.fandom.com/wiki/Koga?oldid=8893"
Community content is available under CC-BY-SA unless otherwise noted.