The Hand of Justice

The Outer Tribunal is made up of merciless, oathbound judges, none more dedicated than Lex. He and his partner, Androxus, traveled the fringes of the Realm together, tracking down infamous criminals and battling all manner of horrors on behalf of the Magistrate. After encountering a sinister goddess, though, Androxus abandoned his duties and quickly rose to the top of the most wanted list.

Lex, unable to turn his back on the law or the Magistrate, vowed to one day take his former partner in, dead or alive.

Dual magnums that fire every 0.7s dealing 680 damage. Effective up to Medium range.

Begin rapidly firing your Magnums at the nearest target to you with perfect aim.

Activate to quickly slide forward in the direction you are facing, retaining the ability to fire your weapons.

You have a Retribution target that is revealed to you when nearby. Killing your target grants additional Credits if they are on a killstreak. Activating Retribution randomly selects a new target.

Release an infallible surge of judgement, executing targets at or below 65% Health. Targets above 65% Health will take 600 damage and be slowed for 1s.

Paladins - Champion Teaser - Lex, The Hand of Justice
Add a photo to this gallery 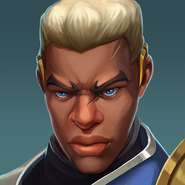 Lex's in-game profile
Add a photo to this gallery

Retrieved from "https://paladins.fandom.com/wiki/Lex?oldid=8638"
Community content is available under CC-BY-SA unless otherwise noted.