After plotting to set herself up as the legitimate heiress to the Ruby Throne, nothing stood in Lian's way. Her sincere dedication to her family's legacy may have earned her the title of Scion, but her skill with the rifle is what won her the respect of her family's Royal Guard.

When the Magistrate called on all loyal houses to unite against the Resistance, she was honor-bound to accept, arriving from her far-off homeland to represent House Aico along with her faithful bodyguard and general, Khan.

A rifle that has been passed down through your noble house for ages. Deals 400 damage every 0.45s at medium range.

Fire a charged shot dealing 400 damage to all enemies in front of you. Acts as a weapon attack.

Quickly dodge in the direction you are moving and fire a rifle shot dealing 400 damage to the enemy nearest to where you are aiming. Acts as a weapon attack.

Charge your rifle for 0.5s then fire a long range shot that pierces enemies and deals 800 damage. Acts as a weapon attack.

Channel the power of your noble blood to gain damage and CC immunity for 1s then fire a powerful blast that passes through enemies and deals 1600 damage. Killing an enemy with Enlightenment will refund 50% of your ultimate charge.

For all of Lian's cards, see Lian/Cards

Paladins - Lian - Ability Breakdown
Add a photo to this gallery 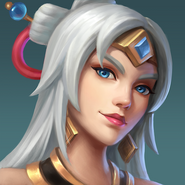 Lian's in-game profile
Add a photo to this gallery

Retrieved from "https://paladins.fandom.com/wiki/Lian?oldid=8658"
Community content is available under CC-BY-SA unless otherwise noted.