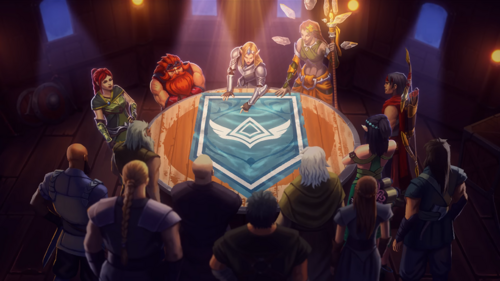 Welcome to the Lore Page where you can easily navigate through the various characters, groups, locations, races, and events in Paladins' story.

Almost all Paladins media is still considered canon[1][2][3], with the only exception seemingly being the Alpha lore[4] and Paladins Strike, the latter of which is an alternate universe[5]. It's unknown if or how Realm Royale connects to the lore.

Please avoid adding fanfictional content, this is an archive for official lore. Even if a theory is plausible, only add confirmed information.

The complete main Paladins timeline can be viewed here.

Individual pages on notable events in the lore can be viewed here.

The New Magistrate is the original Magistrate following Grand Magister Karne stepping down and entrusting leadership of the group to House Aico. Under Lian's new rule, discrimination against the Ska'drin became far worse.

The New Resistance is a group that emerged following the increased discrimination of the Ska'drin under House Aico's leadership of the Magistrate. It's unknown if the group has any connection to the original Resistance.

The Magistrate was the leading power of the Realm that took over once the chaos of centuries past had ended. They decided to ban crystals in fear of the chaos that could be caused. They would later be replaced by the New Magistrate once Karne decided to entrust leadership of the group to House Aico.

The Resistance (also known as the modern Paladins) is a group led by Valera that oppose the Magistrate's decision of banning crystals. It's unknown what happened to this group following Karne stepping down as Grand Magister.

A universe subsuming threat from beyond the Realm.

Champions and groups with no interest in picking a side in the Crystal War between the Magistrate and Resistance.

Characters who share similar goals, but most often do not work together to accomplish them.

Those opposed to the Abyss.

Those opposed to the Darkness.

Those who either protect nature or their people who live in it.

Bomb Kingdom
The Bomb Kingdom is the unofficial name given to Betty La Bomba's former kingdom prior to Bomb King destroying the entire thing.

House Aico
House Aico is a royal house loyal to the Magistrate, ruled by the heiress and Scion of the Ruby Throne, Lian.

Outer Tribunal
The Outer tribunal is a group who, on behalf of the Magistrate, hunt down criminals in the name of the law. They also battle horrors and supernatural threats for the side of justice.

Paladins (Former)
The Paladins were a group of magical warriors who united the Realm through strife and sacrifice during the time of chaos centuries ago.

Sentinels
The Sentinels were an elite military unit working under the Magistrate.

Summer Court
The Summer Court is a group of faeries who wage an endless war against the encroachment of modern civilization.

Warders
The Warders were an ancient group who were able to command dragons and channel their power with items such as the Warder's Relic. It was their efforts that paved the way for the Realm to enter its golden age.

Wekono
Wekono is the Mother of Sorrow and Revenge who every cycle, selects a champion to evangelize her faith by laying waste to those who would oppose her, with Mal'Damba being her current champion.

Unknown Groups
On top of the various known groups, there's also several other mentioned or implied groups that have yet to be given an official name or explored in greater detail.

Paladins is set in the world known as the Realm.

This list only accumulate the base skins and skills. Alternate skins and lores are not taken into consideration.

A list of known NPC characters can be found here.

A list of figures appearing as statues can be found here.

A list of various legends and myths in the Realm of Paladins can be found here.

A list of canon and potentially canon skins can be viewed here.

A list of notable lore misconceptions and unconfirmed theories can be viewed here.

A list of various retcons throughout the years can be viewed here.

The old non-canon alpha lore of the game can be viewed here.