After making a name for herself as a skilled thief and knife-fighter, the half-tigron Maeve decided to join the war for personal gain, selling her services to the highest bidder. She dashes from shadow to shadow with unnatural agility, concealed by her magical longcoat — a souvenir from one of her most daring burglaries: the Magistrate's fortress keep.

While her employers find her talents useful, they often complain of suspiciously-misplaced valuables and lost coins after she moves on to the next fight.

Quickly Dash Forward. Collide with an enemy to perform a melee Strike for 400 Damage.

Reset the Cooldowns of Pounce and Prowl and Heal yourself for 400.

Increase your Movement Speed by 50% and increase your jump height. This effect lasts 5s and will be canceled by using another ability or firing your weapon.

Enemies within 300 units have their vision restricted to a 30-unit radius for 4s.

For all of Maeve's cards, see Maeve/Cards

Paladins in 90 Seconds - Maeve, of Blades
Add a photo to this gallery 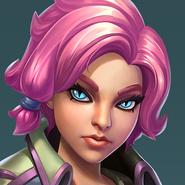 Maeve's in-game profile
Add a photo to this gallery

Retrieved from "https://paladins.fandom.com/wiki/Maeve?oldid=8715"
Community content is available under CC-BY-SA unless otherwise noted.