The Magistrate is a group in the world of Paladins created following the end of the second and final of the Goblin Scourges. Led by Grand Magister Karne, the Magistrate is the leading power in the Realm, consisting of former Paladins and powerful magicians. Under their rule, the Realm's Golden Age of peace lasted for nearly a century. However, after accidents involving crystals began to occur, Karne decided to ban crystals from the general public, ultimately resulting in the Crystal War. The Magistrate may also call upon all loyal houses when needed, such as during the Crystal War itself, as well as when the Darkness monster Yagorath began to cause destruction. 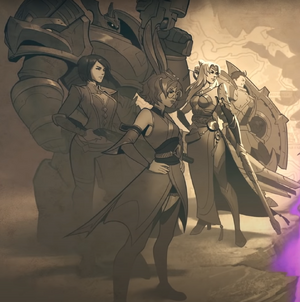 The New Magistrate is the unofficial name given to the Magistrate following House Aico being given control by Karne, following his belief he had failed after Yagorath had been resealed by Azaan. Though this is still the same group as before, due to the large changes to the group as a result of the leadership change, this version of the Magistrate will be seperate from the original.