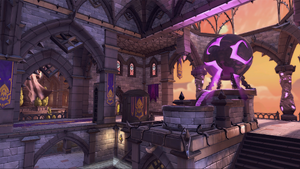 Magistrate's Archives is one of the maps in Paladins and was originally released in the Paladins OB64 update. With the Paladins 3.3 update this map received a major visual rework.

The Game Modes currently playable in this map are Onslaught and King of the Hill.

Trials of the Realm Bio:
"The Archives contain far more than dusty tomes and antique scrolls. It houses histories and magics long forgotten by the Realm, insights to the nature of the Abyss, and some of the more enigmatic discoveries of the Deepwerks."[1]

Other Information:
This map has since been transformed into Corvus' personal study, as revealed here, and here.

As can be seen in Trials of the Realm, this map is part of Crosswind Hold alongside Stone Keep and Splitstone Quarry, as well as Foreman's Rise most likely.

With this visual update we wanted to really play up the “Magistrate” in Magistrate’s Archives. The pastel blues and light hearted feel of the original never really felt like it belonged to the magistrate. With the introduction of Corvus as a prominent figure of the Magistrate we wanted to give the Archives a serious facelift and position it as Corvus’ personal study. We’ve included brand new statues of both Karne and Valera, as allegiances shifted, over time, Valera’s statue has fallen into disrepair while Karne’s has been well cared for to this day. Throughout the level, though most prominently at the center of the map, we’ve included evidence of Corvus’ obsession with the Abyss and the power it represents. We hope players will enjoy this upgrade in visual quality as well as the lore we’ve done our best to inject into the level.