Once the dedicated protector of the island home of the Ska'drin, the ancient Makoa has now been summoned to the mainland. In his absence, he fears that he cannot ensure the safety of the volcanic islands.

But with the greater threat in the Realm, he's taken to the land, to make sure those he protects have a home to return to. With him, he brings the ocean's fury and the tortoise's indomitable resilience, as well as various naval implements, to bear against those who would defile the natural world.

A salvaged ship cannon that fires cannonballs every 1s, each dealing 650 damage.

Hurl your anchor. If it hits an enemy, reel them in and deal 100 damage, stunning them.

Project a 6000 health shield that blocks enemy fire for 4 seconds.

Retreat into your shell and spin forward, knocking back enemies in your path.

Call on the powers of the Ancients. Drop Your cannon and swing your anchor, dealing 650 damage a hit. In addition, increase your health by 5000. Lasts 8s.

Paladins - Champion Teaser - Makoa, The Ancient
Add a photo to this gallery 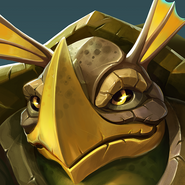 Makoa's in-game profile
Add a photo to this gallery

Retrieved from "https://paladins.fandom.com/wiki/Makoa?oldid=8709"
Community content is available under CC-BY-SA unless otherwise noted.