When Wekono, the Mother of Sorrow and Revenge, turns her gaze to the mortal world, she appoints a champion. In this cycle, the island witchdoctor Mal'Damba has been gifted with her powers and sent into the war to evangelize her faith by laying waste to any who would stand before his goddess.

His mastery of dark magic and virulent poisons was already impressive before the insidious goddess imbued him with even greater abilities, rendering him one of the deadliest beings in the Realm, an extension of Wekono's will.

Fires as glob of venom every .55s dealing 450 damage to a single target. Effective at Short Range.
Bonus Damage: Reloading throws the cobra dealing up to 550 based on how much ammo is missing and stunning enemies for 1s.

Summon a spirit to enchant an ally healing 280 Health every second for 5 seconds.

Toss a gourd full of venom that heals allies for 280 Health every second and damages enemies for 200 Damage every second.

Fire a dark vessel that explodes when it lands, fearing all enemy Champions for 2s. 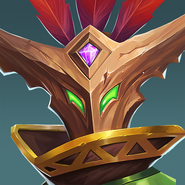 Mal'Damba's in-game profile
Add a photo to this gallery

Retrieved from "https://paladins.fandom.com/wiki/Mal%27Damba?oldid=8724"
Community content is available under CC-BY-SA unless otherwise noted.