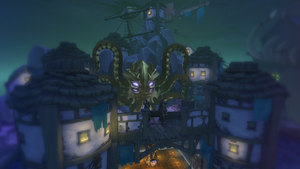 Marauder's Port is one of the maps in Paladins and was released in the Paladins 1.6 update.

The Game Modes that are currently playable in this map are Onslaught and King of the Hill.

Trials of the Realm Bio:
"Strategically located not far off the western coasts of the mainland, Marauder's Port oversees the crossing from North to South. Whoever controls this area controls the west coast of the entire Realm."[1]

Other Information
As explained here and here, Marauder's Port used to be an ancient lair for Abyssal Cultists who worshipped the kraken, before they vanished, while most honest citizens fled in fear of living among the cursed ruins, leading to it becoming a location used by pirates and crooks seeking to escape watchful eyes. It currently serves as Dredge's lair.

As can be seen in Trials of the Realm[1], Marauder's Port is located near Warder's Watch.