While the rest of the rabbit-like leipori fled to the forests to avoid getting involved in the war raging across the Realm, Moji took it upon herself to summon the great nature spirits to defend the world.

She charges into battle atop her trusty familiar, Po-Li, who carries her through the fray as she unleashes a maelstrom of sorcerous destruction on her enemies. Once the war is over and the Realm has returned to its natural state, she hopes to return to the forest and help her people begin the healing process, restoring all that was lost.

Spit out magical projectiles that deal more damage based on how many Magic Marks are on the enemy.

Project a barrier that absorbs attacks and applies Magic Marks on enemies that hit you.

Transform a single victim into a delicious, helpless treat that you can eat, killing them instantly. 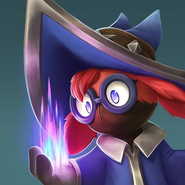 Moji's in-game profile
Add a photo to this gallery

Retrieved from "https://paladins.fandom.com/wiki/Moji?oldid=8940"
Community content is available under CC-BY-SA unless otherwise noted.