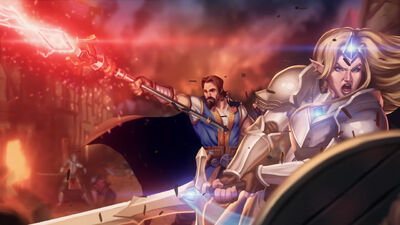 The Paladins were a group of magical warriors who united the Realm through strife and sacrifice. They formed around the time of the Goblin Scourges to defend the Realm, creating the Stagalla to assist them with this goal. The group defeated the goblins of the Second Scourge in Stone Keep, and with that, all threats to the Realm's peace had been dealt with, allowing the Realm to enter a Golden Age of peace that lasted for centuries. But in these peaceful times there was no need for warriors, and so the Paladins disbanded and left the Realm to the Magistrate, a council of former Paladins and powerful magicians, under their rule the Realm's Golden Age continued for centuries.