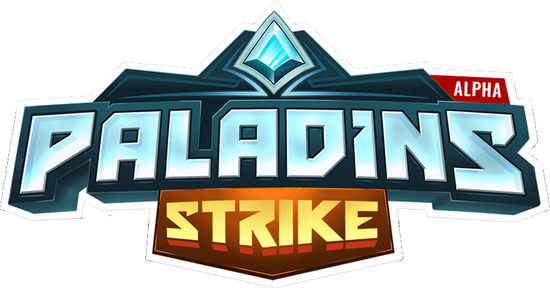 Paladins Strike was a free-to-play MOBA and hero shooter hybrid game for mobile devices developed by Hi-Rez Studios and launched on May 2nd, 2018. It was taken down at the beginning of February 2019. In Paladins Strike, most of the characters from the original game were present, with all their abilities adapted to suit the canons of the MOBA genre. Here too, the game was based on 5 vs 5 battles. The fights were carried out in real-time with an isometric top view. Paladins Strike was free-to-play: the game relied on micro-transactions and in-app purchases.[1][2]

The main game mode was Siege, where two teams of five attempt to push the payload into the opposing team's base. If neither team was able to do so within the time limit, a sudden death king of the hill round decides the victor. Matches were short, lasting between six and ten minutes. There were three other modes available as well. Summons was another objective-based mode, with a slightly longer duration at about 10 minutes. Deathmatch was the shortest game mode at just 5 minutes, and the final option was a practice mode.[3]

Enter the Realm! Are you ready to play the world's best mobile hero shooter?
Become a legend and master more than 15 different Champions. Battle with your friends using high-powered guns and casting MOBA-like abilities in real-time, 5v5 combat. It's your favorite hero shooter, perfected for mobile.

As stated on the official Strike website via the Wayback Machine, all champions (known as "Strikers" here) from the original game were meant to appear, though due to Strike's decline, ultimately, not every champion was added. Almost every character prior to and including Terminus was in the game at some point, with the exception of Torvald, Lian, Jenos, and Talus. Champions who received visual reworks in the original game didn't receive them in Strike, among other visual differences, such as Makoa lacking ears for an unknown reason.

Strike also featured one original character known as Kai. As stated here, Kai is exclusive to the world of Strike and there was and likely still is, no intention of ever bringing her into the main game or its lore (with the reason being mentioned as legal / copyright issues). As mentioned there as well, the world of Strike is an alternate universe to the original game.

Strike is most commonly remembered for the many unique skins it contained, most of which not being present in the original Paladins, even till this very day, largely due to the differences between Strike and the original game.[4] All unique skins from Strike can be viewed here.

This game featured two promotional skins available in the original Paladins game, as can be seen here. This included Strike Maeve, which was obtained when connecting a Hi-Rez account to Strike; as well as Covert Ops Lex, which was obtained the same way, though with the additional requirement of needing to collect 1500

in Strike (this Lex skin is also the only one featured in both the original game and Strike).

There was also a unique avatar available from winning 25 games in Strike, with the avatar in question being this.