Unlike most other vulpin, Pip chose to specialize in weaponized explosives instead of curative alchemy. He left Brightmarsh, his homeland, in search of adventure across the Realm.

Now, he splits his time between brewing up all sorts of fiery concoctions to use against the Magistrate's forces and creating restorative potions to aid his friends. While his allies have come to appreciate his assistance and expertise, they fully understand that the little fox is as unpredictable as his dangerous mixtures.

A custom launcher that fires volatile potions every 1s that explode in an area on impact dealing 600 damage per hit.

Fire an explosive flask that deals 150 damage and slows enemies by 50% for 2.5s.

Jump higher for 3s. Pip can shoot during Weightless.

Throw a healing potion that heals teammates for 1200 Health when it explodes.

Throw a flask that deals 200 damage and turns enemies into chickens with 1500 health for 4s. Victims are returned to their previous state when the effect ends.

Paladins - How to Play - Pip (The Ultimate Guide!) 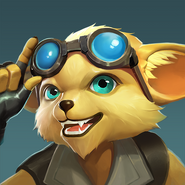 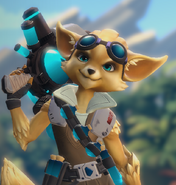 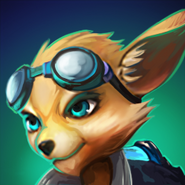 Pip by Charley Fox
Add a photo to this gallery

Retrieved from "https://paladins.fandom.com/wiki/Pip?oldid=8928"
Community content is available under CC-BY-SA unless otherwise noted.