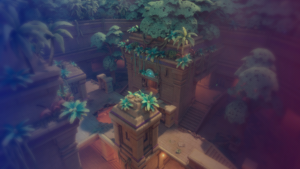 Primal Court (previously known as Skirmish Arena) is one of the maps in Paladins and was released in the Paladins CB26 update.

This map was designed for the Game Mode called Survival but the mode that is currently playable in this map is Onslaught.

As can be seen in the official map of the Realm, Primal Court is part of the Temple Isles alongside Frog Isle, Serpent Beach, and Jaguar Falls.