Paladins Public Test Server (PTS) is a special server that contains an upcoming Paladins Update, allowing the player to play the newest Paladins build early, before going Live. It helps the community work with the development team in receiving feedback and issues/bugs before it reaches Live users. The PTS is only available for a limited time after an Update is announced. The players can check the Patch notes to test the new content on the PTS. The PTS is usually available a couple of days after the Update Show. PTS accounts are copies from Live, however, PTS will usually be on an older account version of Live.

How to Install[edit | edit source]

To access the PTS, the player must go to the Store Page for Paladins on Steam, and scroll down until a notice with the following text appears:

Want to participate in the Paladins Public Test? Click here to install it now.

After clicking on the highlighted text (in the Store Page), the PTS should start downloading. After finishing, the game will be available in your Steam Library. Make sure your "Launch Options" are completely empty, otherwise the game will ask you to login with your Hi-Rez account. If you have "-nosteam" in the Launch Options, erase it.

If the servers are in maintenance, don't worry; this is not a problem at your end, the PTS is currently being updated. And if there's nothing after you downloaded or if the PTS doesn't open, it's not available publicly yet.

How to get Crystals and DLCs for free[edit | edit source]

In addition, players can buy Crystals and DLCs for free on the PTS. To achieve this, the player has to launch the PTS via Steam with the "Steam Overlay" toggled on to be able to access the transaction page, then buy crystals or DLCs as usual. The button should display the text "Authorize" instead of "Add Funds". 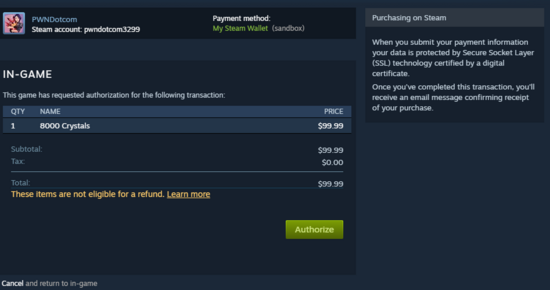