Rage of the Abyss

All tremble at the mere mention of his name. He is wrath. He is fury. He is Raum, Rage of the Abyss. Consumed by burning conflict, tempered in the Abyss, his purpose is clear — annihilation.

He has fought and triumphed over every entity in those war-scarred plains, shattering every soul that stands against his might. Few remain who are still worthy of his attention, and their conflicts grow stale. Now, he finds himself summoned to the Realm, a fertile ground teeming with new victims whose souls are too well-connected to their bodies.

An Abyssal Gatling gun that shreds its targets' souls every 5 hits. Deals 45 damage every 0.05s when fully spun up. Each soul fragment can be consumed to gain soul armor.

Ignite your Gatling gun to fully spin it up and consume no ammo for 3s.

Wind up and take off charging, dealing 700 damage and knocking up players hit.

Harvest your enemies' shattered souls, drawing loose souls in and gaining 2000 soul armor on activation, as well as an additional 200 soul armor for each fragment collected.

Stomp the ground and send forth a shockwave that deals 999 damage and stuns enemies for 1.2s. This ability destroys Shields and Deployable walls.

Paladins - Champion Teaser - Raum, Rage of the Abyss
Add a photo to this gallery 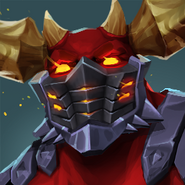 Raum's in-game profile
Add a photo to this gallery

Retrieved from "https://paladins.fandom.com/wiki/Raum?oldid=8828"
Community content is available under CC-BY-SA unless otherwise noted.