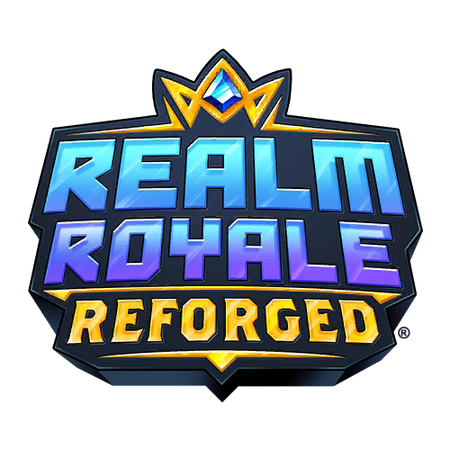 Realm Royale is a free-to-play battle royale and hero shooter hybrid game developed by Heroic Leap Studios and launched on June 5, 2018. The game received its last update on February 4th, 2018[2], while support was officially dropped on August 17th, 2020[3], though servers will remain up for the foreseeable future. Realm Royale turned into its own game after it was one of the Game Modes in Paladins, named Battlegrounds.

Realm Royale offered unique battle royale gameplay in a number of ways, from the ability to mount up at any time to travel faster, the ability to turn spare weapons and abilities into shards to be used at the forge in order to craft powerful new weapons and abilities, to being transformed into a chicken upon losing all one's health and being revived if one can survive long enough.

The game also offered a variety of customization options, allowing players to change certain aspects of their character and game in general, from skins for the various classes and their chicken forms to mastery reward benefits, avatars, sprays,titles, mounts, skydive effects, map markers, loading screens, and battle passes.

Be the last Champion standing in Realm Royale! Choose a class, then loot deadly weapons and powerful abilities to create your own Champion. Explore a fantasy world from horseback, and craft game-changing legendary gear. Can you survive the first 100-person fantasy Battle Royale?

Seemingly set in the distant future of the Realm, an unknown darkness looms over the Realm. To combat this threat, warriors would be trained, wars would be waged, ancient weapons and magic would be sourced from all over the universe, in the hopes of giving the Realm a chance at defeating this approaching threat.

Realm Royale also has a number of NPCs.

It is unknown how or if Realm Royale connects to the original game.

Realm Royale originally had 5 playable classes, though one was eventually removed. Each class also has a number of unique skins, viewable on their own pages.

Similar to Paladins, classes unlock unique benefits as a player's mastery level with them increases, but only a limited number of perks can be applied at once.

Full lists of all weapons and abilities available here.