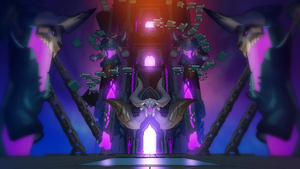 Rise of Furia was one of the maps in Paladins and was originally released in the Paladins 1.1 update. With the Paladins 1.3 this map and the event it was introduced with were both later removed from game.

This map was a jump and run map with a mirrored layout at the top and is designed for 2 teams of 5 players. The players raced to the top of the huge demonic spire, avoiding rockets fired by an abyssal lord. On the top, they end fight in form of a Team Deathmatch takes places. This part of the map, which was re-released as Throne, is still playable to this day. The only Game Mode that was playable on this map was Rise of Furia.

Relive the day the city of Seris was destroyed and thousands of souls were cast into the Abyss. You have been trapped in the vile recesses of this ancient hell... but there is still hope. Race against your doom and climb the Abyssal Spire. The transformed Furia would also enter the Abyss, taking her revenge against the Abyssal Lord that destroyed her home and took her sister away from her.